From Citizendium
Jump to navigation Jump to search

The content on this page originated on Wikipedia and is yet to be significantly improved. Contributors are invited to replace and add material to make this an original article.

In mathematics, a group is a set endowed with a binary operation satisfying certain axioms, detailed below. For example, the set of integers with addition as the binary operation is a group. Group theory is the branch of mathematics which studies groups.

Group theory originated with the work of Évariste Galois, in 1830, on the problem of when an algebraic equation is soluble by radicals. Before this work, groups were mainly studied in terms of permutations. Some aspects of abelian group theory were also known in the theory of quadratic forms.

Many of the structures investigated in mathematics turn out to be groups. These include familiar number systems, such as the integers, the rational numbers, the real numbers, and the complex numbers under addition, as well as the non-zero rationals, reals, and complex numbers, under multiplication. Other important examples are the group of non-singular matrices under multiplication and the group of invertible functions under composition. Group theory allows one to study such structures in a general setting.

Group theory has extensive applications in mathematics, science, and engineering. Many algebraic structures such as fields and vector spaces are based on groups, and group theory provides an important tool for studying symmetry, since the symmetries of any object form a group. Groups are thus pertinent to branches of sciences involving symmetry principles, such as relativity, quantum mechanics, particle physics, chemistry, computer graphics, and others.

A group (G, * ) is a set G along with a function * : G × G → G, satisfying the group axioms below. The function * is called a binary operator. Here "a * b" represents the result of applying the function * to the ordered pair (a, b) of elements in G. The group axioms are the following:

One often also sees the axiom:

Since the definition of group given here uses the notion of binary operation, closure is automatically satisfied and hence would be superfluous as an axiom. When determining if a given * is a group operation, one nevertheless checks that * satisfies closure as part of verifying that it is, in fact, a binary operation.

The order of a group G, denoted by |G| or o(G), is the number of elements of the set G. A group is called finite if it has finitely many elements, that is if the set G is a finite set.

When there is no ambiguity, the group (G, * ) is often denoted simply as "G", leaving the operation * unmentioned. But different operations on the same set would define different groups.

The operation in a group need not be commutative, that is there may exist elements a,b such that a * b ≠ b * a. A group G is said to be abelian (after the mathematician Niels Abel) (or commutative) if for every a, b in G, a * b = b * a. Groups lacking this property are called non-abelian.

The axioms given above in the definition of group are stronger than what is strictly required. Sufficient are associativity, the existence of a right neutral element (that is, there is an element e such that x * e = x for all x), and the existence of right inverses with respect to this right neutral element (that is, for each x, there is a y such that x * y = e). It follows from these that the postulated right neutral element e is also a left neutral element, and hence, as above, is unique. Further, it follows that each right inverse is also a left inverse. Thus, the axiomatization given above is not strictly minimal in the logical sense; however, it is customary. One reason for the custom is that the axioms as given are easily remembered and checked in practice. Another reason is that subsets or variants of the axioms define other useful algebraic structures — e.g., groupoids and semigroups.

Groups can be axiomatized in ways other than the one presented above. For instance, a group is a set G closed under:

Usually the operation, whatever it really is, is thought of as an analogue of multiplication, and the group operations are therefore written multiplicatively. That is:

However, sometimes the group operation is thought of as analogous to addition and written additively:

Usually, only abelian (commutative) groups are written additively, although they may also be written multiplicatively. When being noncommittal, one can use the notation (with "*") and terminology that was introduced in the definition, using the notation a−1 for the inverse of a.

Some elementary examples and nonexamples

An abelian group: the integers under addition

The integers with both addition and multiplication together form the more complicated algebraic structure of a ring. In fact, the elements of any ring form an abelian group under addition, called the additive group of the ring.

Not a group: the integers under multiplication

On the other hand, if we consider the operation of multiplication, denoted by "·", then (Z,·) is not a group:

Since not every element of (Z,·) has an inverse, (Z,·) is not a group. The most we can say is that it is a commutative monoid.

An abelian group: the nonzero rational numbers under multiplication

However, if we instead use the set Q \ {0} instead of Q, that is include every rational number except zero, then (Q \ {0},·) does form an abelian group (written multiplicatively). The inverse of a/b is b/a, and the other group axioms are simple to check. We don't lose closure by removing zero, because the product of two nonzero rationals is never zero.

Just as the integers form a ring, the rational numbers form the algebraic structure of a field, allowing the operations of addition, subtraction, multiplication and division. In fact, the nonzero elements of any given field form a group under multiplication, called the multiplicative group of the field.

A finite nonabelian group: permutations of a set 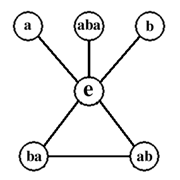 Cycle diagram for S3. A loop specifies a series of powers of any element connected to the identity element (1). For example, the e-ba-ab loop reflects the fact that (ba)2=ab and (ba)3=e, as well as the fact that (ab)2=ba and (ab)3=e The other "loops" are roots of unity so that, for example a2=e.

In multiplicative form, we traditionally write xy for the combined action "first do y, then do x"; so that ab is the action RGB → RBG → BRG, i.e., "take the last block and move it to the front". If we write e for "leave the blocks as they are" (the identity action), then we can write the six permutations of the set of three blocks as the following actions:

Note that the action aa has the effect RGB → GRB → RGB, leaving the blocks as they were; so we can write aa = e. Similarly,

so each of the above actions has an inverse.

By inspection, we can also determine associativity and closure; note for example that

This group is called the symmetric group on 3 letters, or S3. It has order 6 (or 3 factorial), and is non-abelian (since, for example, ab ≠ ba). Since S3 is built up from the basic actions a and b, we say that the set {a,b} generates it.

Every group can be expressed in terms of permutation groups like S3; this result is Cayley's theorem and is studied as part of the subject of group actions.

Therefore the inverse is unique.

And similarly for the other direction.

These and other basic facts that hold for all individual groups form the field of elementary group theory.

Constructing new groups from given ones

In abstract algebra, we get some related structures which are similar to groups by relaxing some of the axioms given at the top of the article.

Groupoids, which are similar to groups except that the composition a * b need not be defined for all a and b, arise in the study of more involved kinds of symmetries, often in topological and analytical structures. They are special sorts of categories.

Supergroups and Hopf algebras are other generalizations.

Lie groups, algebraic groups and topological groups are examples of group objects: group-like structures sitting in a category other than the ordinary category of sets.

Abelian groups form the prototype for the concept of an abelian category, which has applications to vector spaces and beyond.

Formal group laws are certain formal power series which have properties much like a group operation.